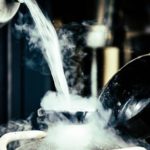 Liquid nitrogen has come to the fore in recent years as it has become a popular way of producing a stunning cloud of vapor for cocktails and gourmet ice cream. The BBC reports the first recorded use of liquid nitrogen in cooking dates back to an 1890 cookbook by Mrs. Marshall. However, the fact liquid nitrogen has been a popular food ingredient for many years is one aspect of its use which is more common in the development of the liquid nitrogen freezer and cryogenics. A freezer is one of the most important pieces of equipment used in a laboratory environment created by specialized industrial designers and construction experts.

The Benefits Of Liquid Nitrogen

Liquid nitrogen can be used in the freezing process of many different materials including food, blood samples, and tissue. When liquid nitrogen is used as a freezing agent it encases any material in a vacuum of liquid gas which allows for a more stable period of freezing than that offered by traditional freezing methods.

Many laboratories choose to include liquid nitrogen freezing in their facilities because this method of freezing is far faster than traditional mechanical freezing methods which take longer to complete the process. By moving through the process at a faster rate, freezers using liquid nitrogen as a coolant can reduce the chances of degradation of samples which can cause problems with obtaining accurate results.

There are a number of options for those looking to invest in a freezer using liquid nitrogen as its coolant. Firstly, the traditional freezer uses liquid nitrogen pumped around the walls of the freezer in a traditional way which can be subject to problems if the mechanical equipment fails. The upright freezer uses a front loading door option which can allow some heat transfer to taken place during the time when materials are loaded and unloaded into and out of the equipment.

The second option regarding liquid nitrogen used as a cryogen is to use a top loading freezer option which includes liquid nitrogen pumped through the walls of the equipment. In this option, the chances of individual problems caused by leaking liquid nitrogen are significantly reduced because of the fact the coolant is maintained within the walls of the equipment. The small opening used at the top of this form of freezer benefits the user because the amount of heat transfer potentially damaging sensitive materials is limited.

Be the first to comment on "Nitrogen in Liquid Form"