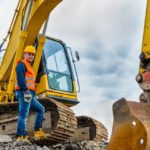 Since the beginning of civilization it took teams of people building infrastructure to promote unity create boundaries ultimately creating nations. In today’s society time is money this goes for all aspect of every industry including the construction industry. With a group of hard working people equipped with tools that will make them more productive is a recipe for success.

Heavy equipment is critical to building infrastructure. From roads bridges tunnels as well as commercial needs like housings and businesses or installing any pole mounted transformers. Heavy equipment acts as a force multiplier it allows for less people to do more work. Some examples of heavy equipment would be dozers, loaders, graders, excavators, scrapers, backhoes, cranes-draglines, forklifts-man lifts, compactors/rollers, cable plows, American augers, mixers, heavy haul trucks as well as many more.

Heavy equipment can be used in a variety of different ways with equipment used as general purpose for a wide variety of applications or special purpose equipment designed to be extremely effective at doing one job. Whatever the purpose of the equipment it can be costly even on the used market some heavy equipment can bring in hundreds of thousands of dollars. On top of the initial cost you must think of the cost of ownership. Parts for these machines are expensive making repairs costly. \

When looking at the cost of heavy equipment you must understand looking at the long term productivity the equipment will give the organization or company using it is worth it. The private sector as well as the government sure does think so. Government agencies from the local, city, state all the way up to the federal level uses heavy equipment. From the military to sanitation and highway repair organizations. \

The private market spent $1.005 trillion on heavy equipment during 2018. The government spent $304 billion on heavy equipment during 2018. With numbers as shocking as this it shows how important these pieces of equipment are to building infrastructure. It is so important that there are educational institutions that train and educate people on how to operate as well as work on heavy equipment. A few examples would be diesel mechanic school and heavy equipment operator schools that offer levels of education from level one that involves hydraulic cranes and large hydraulic cranes. Level two being lattice boom cranes, articulated boom cranes. Then level three involving tower cranes and digger derrick. This is just one example of crane certifications you can get at different levels. There is a variety of different certifications from truck, drilling, mixers and more.

Ultimately the importance of heavy equipment can be seen through the spending both the government and privet sector spend on these high quality machines. As well the productivity they create when an organization or company owns one of them. Although expensive they pay for themselves in the long run. Allowing companies to take on more jobs. The bigger time consuming jobs will get done faster. As for the government it helps keep our men and women in uniform safer allows for cities and states to conduct better quality of work in shorter time periods saving tax payers money.